My Thoughts on Goldie Blox as a Female Engineer

Over the past week Goldie Blox has drummed up quite a bit of buzz, but it has also stirred up some controversy. For those unfamiliar with the toy, it is a series of books and building items designed to teach kids about pre-engineering principles by combining story with hands on activities. Sounds like a great toy. So where does the controversy lie? The tools, spools, ribbons, and other items are donned in pinks, purples, and yellows in an effort to directly target girls. This has been labeled a "girl toy". 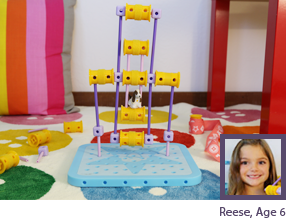 Now I will preface by saying I don't believe in girl toys and boy toys. My sister and I both played with Legos, dinosaurs, trucks, Hotwheels, and on and on. We also played with dolls, had tea parties, and played dress up. We did it all. So the fact that Goldie Blox is aimed directly at girls is both exciting and disappointing all at the same time. I'm honestly utterly torn.

As a female engineer it is readily apparent to me every day that I am in a minority. There are some days I look around me for a female face and there are none. Quite often I am the only female in a room. It sucks and unfortunately there's really no better explanation for it. In my job, I am often looked on to do "girl tasks" such as run webex meetings, organize things, and take notes in meetings. Women in the workplace are often viewed as the mom's and are expected to think of everything when others don't. No disrespect to mom's, secretaries, office administrators, or other hard working individuals but while those things are a part of my job, it is not my sole responsibility day in and day out. I have engineering work to do as well. And while others have similar engineering work, it is also everyone's responsibility to do the "girl tasks" in their day to day jobs. Just because there is a female in the office does not mean it is solely her job to take care of those things.

Even worse, I still deal with gender stereotypes and comments that sometimes cross the line. And when a women has a baby, look out that's the end of her career. It is unfair to have to deal with these views. It is also something I've had to learn to stand up against. Something I never should have had to do. But that is the reality of women in engineering today. In fact, it's the reality of a lot of women in the workplace today. There are still stereotypes every single day, and I often have to work harder to prove that I am just as capable as my male counter parts. That I don't just bat my eyelashes to get what I want. That I struggle and claw and pull my way along some days just to show I can do it too, that my ideas are just as good as everyone else's.

So when a toy like Goldie Blox comes along and gets girls interested in a field that is struggling on a daily basis to not only maintain female numbers but also increase them, I applaud them. There is not nearly enough of this kind of thing in the world. That said, I think some of their marketing is a little misguided. But their heart is certainly in the right place.

There's no denying that most girls like pink, so I give Goldie Blox a ton of credit for making a toy that will attract young girls' eyes. But if you read Goldie Blox's FAQ, I mean really read it, there's a point in there that I think is being vastly overlooked.


6)    What engineering principles are being taught through the GoldieBlox toy?


Whether this toy is pink, purple, green, blue or tie dye, it's teaching kids (yes I said kids and not girls!) about engineering principles in a hands on way. When I was young, I really only learned about these principles from a text book. Which is often a difficult way to learn. This toy combines multiple kinds of learning with storytelling and hands on activities. It helps kids understand complex ideas at a younger age. I'm of firm belief that the sooner we turn kids on to things, the more prepared they are to handle struggles.

Fact of the matter is, everything we've learned in our lives down to walking and talking was hard at one point. But we overcame those difficulties and learned to do them. Engineering, math, and science are no different. Nothing in life is any different. Everything is hard at one point. We don't come out of the womb knowing it all and able to do everything. Kids see this everyday. They struggle. Many quit because of it.

The sooner we get kids turned on to complex topics and help them build that foundation, the better. Once kids have the basic tools, learning more complex concepts becomes easier. And the longer you do something the simpler it becomes. While not overly advertised, that is something this toy focuses on. Teaching kids pre-engineering principles in a way that they can understand and master them. But you can't entirely fault their marketing scheme. Clearly pink and purple are working. Look how many people are talking about this toy. But I hope in the future Goldie Blox expands their marketing to include what the toy is really about, teaching engineering principles to kids. 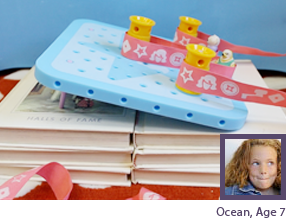 In this country, we can't train people in STEM careers fast enough. There is not enough supply to meet the increasing demand. So any toy that turns kids on to engineering, boy, girl, alien or what have you, is something we need more of. So why focus on girls when this is a problem in general? Because girls are much more likely to abandoned STEM fields at an earlier age. When asked about skills mastery, girls consistently rank themselves lower than boys of equal skill level. It's one reason why so many women leave engineering fields everyday. Women have to work harder, not only to overcome the stereotypes, but to overcome their own internal thoughts and feelings. It's exhausting.

The sooner we turn girls onto STEM the better. The sooner we expose kids to these ideals, and show them the possibilities, the sooner we start preparing for the future. This stuff is hard, but if we show kids it can be done, they build that confidence. They work harder. They don't quit as easily. And this something every kid needs to see, hear, and experience. Something a toy like Goldie Blox shows kids. That this stuff isn't so hard, it just takes some work and looking at it in a different way.

In the end whether you like the toy or not, the controversy has brought light to a topic that is near and dear to my heart. A topic that is not addressed nearly enough. Something that doesn't get enough attention. That we need more women in STEM fields. And if this toy can make the world not only notice this, but also face this issue head on and talk about it in any light, then I am 100% percent behind it, no questions asked.

Unfortunately there is no such thing as the perfect pitch. Even worse, how do you boil all the awesome going on in your book into a query, or something shorter like a 35 word pitch. The short answer? You don't. You can't include every cool detail. You also can't answer every possible question asked. That's what the book is for. So how do you know what to include and what to toss?

The first question to ask yourself is what is the single most unique part of your book? What makes you book different from all the other ones out there with similarities? If you've found that bit then you have the basis for your pitch. Why start here? Because the point of your pitch is not to tell every little detail and plot point but to intrigue the reader, make them want to know more about your book.

From the unique piece, you can start crafting. Build outward from there. With that unique part, you should be able to tie to at least one important piece of your pitch, your inciting incident, your conflict, and/or your stakes. Once you have a link you should be able to weave all the details together into your pitch. Make sure you include enough detail that you can follow a logical progression through all of these things without leaving holes or too many confusing questions. But you also don't want so much detail that you are giving away your entire book or overloading the reader. Find the balance.

Now that you have a pitch, see what kind of questions people are asking about it. Questions aren't always a bad thing. Your reader should be asking questions after a pitch but they shouldn't be ones driven by confusion. They should want to know more about your story. Hopefully you planted a seed that makes them want to read and learn more about your book. So don't worry about trying to squeeze in every detail. Find what reels in the reader and ditch the rest.

Obviously a query is going to have more detail than a logline or short pitch but if you focus on the unique hook of your story first, that should help you bring in just enough detail to weave a great pitch.

What helps you construct your pitches?
Posted by Jamie Krakover at 8:11 AM 9 comments: