The Importance of a Voice

As writers we talk about voice, a lot. About how important is to have a unique voice that stands out and draws the reader in. But there is another voice that is equally important. The one each and every one of us has. The unique perspective we each have on life. This is why we write, to share our unique experiences with others. To speak for the thousands of voices shouting in our heads.

Last night in Texas, one woman proved the power of one voice. She refused to sit by and let something she believed in be trampled. As writers this is something we do every time we put words on the page. We speak for those who refuse to sit by idol and not be heard. Those voices may not always be real, but they definitely have something to say. They have meaning.

This morning as I woke up to a storm on Twitter, I realized the power behind a single voice. How one person can rally hundreds and thousands of voices to be heard. If it wasn't for the writing community bringing to light such an important issue, I would have never known what happened in Texas. Thanks to the news, this important historic event was nearly ignored and forgotten. But the writing community used their voices to not only support one voice but to amplify it to the world. The writing community made the voices heard. Because this is what we do as writers. We use our voices, we put them out in the world, and sometimes, we change it.

I want to say a huge thank you to writing community. As always, you stood strong and do what you do best. You used your voices!

As we go into today and more big decisions, keep doing what you do best. Be loud, be proud, and spread the word! Be the amplifier for the voices in the world!
Posted by Jamie Krakover at 6:58 AM No comments: 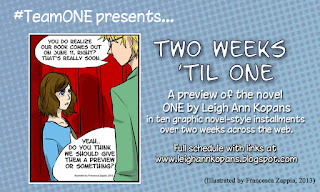 Hey all! Back here representing #TeamONE with the final installment of the ONE Comic. It's a depiction of my absolute favorite scene in the book and let me tell you this is nothing short of beautiful, fabulousness (yes I'm making up words cause it's that awesome!) I hope you've enjoyed the comic series. I know I have! Isn't that just absolutely stunning? Makes me wish I could draw. And if that wont make you go pick up a copy of ONE, I don't know what will! So go get your copy of ONE, it releases TOMORROW!  Check out my review of ONE!


Find a full list with links to the other installments of this series on the author’s blog:  www.leighannkopans.blogspot.com
Or follow the author on Twitter @LeighAnnKopans for daily updates! 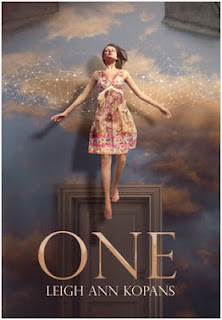 It makes you a One.

Sixteen-year-old Merrin Grey would love to be able to fly – too bad all she can do is hover.

If she could just land an internship at the Biotech Hub, she might finally figure out how to fix herself. She busts her butt in AP Chem and salivates over the Hub’s research on the manifestation of superpowers, all in hopes of boosting her chances.

Then she meets Elias VanDyne, another One, and all her carefully crafted plans fly out the window. Literally. When the two of them touch, their Ones combine to make them fly, and when they’re not soaring over the Nebraska cornfields, they’re busy falling for each other.

Merrin's mad chemistry skills land her a spot on the Hub's internship short list, but as she gets closer to the life she always wanted, she discovers that the Hub’s purpose is more sinister than it has always seemed. Now it’s up to her to decide if it's more important to fly solo, or to save everything - and everyone - she loves.

Add ONE to your Goodreads and learn more about the author here: http://www.goodreads.com/book/show/17251203-one
Posted by Jamie Krakover at 1:00 AM No comments: 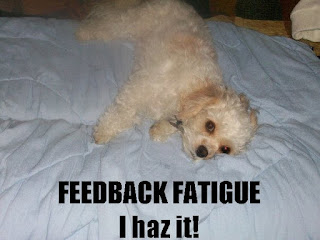 Well the obvious answer is when you are happy with your work. But let's face it, we crazy writers are almost never happy with our work. Some of us, myself included will edit ourselves to death. We keep asking for feedback in hopes of finding some new angle to fix. And then sooner or later you are reaching the point of over-saturation. You have so much advice, you don't know which end is up.

I know! Because I'm there!

I've had so much feedback on my query and first page that I'm almost lost. I feel like a yo-yo. I'm constantly going back and forth between modifications and I can't seem to please everyone. Which is fine because I shouldn't try to please everyone. I should try to clear up any confusion I'm seeing from multiple readers, polish it off, and hopefully find my happy place... hopefully. Because if I don't Feedback Fatigue may be the death of me... literally!

So how do you know if you have the dreaded Feedback Fatigue?

If you've reached the point of confusion and have multiple options on your query letter and first pages, and they are all just slightly different you've probably gone too far. A few minor tweaks here or there is probably not going to make or break your query or first pages. So take a step back, take a deep breath, and relax.

If you've reached the point where you change something and then get a comment that makes you want to go back to your previous revision. You might also have gone too far. When you start yo-yoing on your edits and constantly waver between two options, you've either gotten too much advice or you aren't listening to your gut. Not every piece of advice is meant to be followed and if you do follow everything it will make you crazy. So just stop, take a deep breath, and find what resonates with you, then ignore the rest.

If you've had so many people comment on your work that you've lost count, you've probably had too much feedback. When it comes to feedback sometimes less is more. Using a small group of trusted (key word trusted) critique partners instead of the masses can sometimes be in your favor. Will that group see every issue? Probably not, but they will catch a majority of the major stuff and it will save you the insanity of trying to sort through comments that may or may not be helpful.

So writers, stop beating yourselves up and driving yourselves crazy. Writing is never going to be perfect, so stop trying to make it that way. Do the best you can, find the happy place, and avoid the wicked Feedback Fatigue.

Have any of you ever experienced feedback fatigue? And if so how did you deal with it?
Posted by Jamie Krakover at 1:42 PM 4 comments:

Welcome Query Kombatants. Here is my improved query and first page. Let me know what you think and I'm always happy to return the favor of a critique.

When an alien race known as the Adviera abducts thirteen-year-old Gary Jones, they grant him the power of telekinesis. Unfortunately this cool new ability comes with a price. The Adviera believes Gary could be the key to saving their race. As they secretly groom him for their war effort, he is forced to undergo a rigorous training program alongside other abducted Earth kids with abilities.

Although Gary works closely with his alien trainer, Esther, he’s unprepared for the missions and simulated battles the Adviera force him into. If the alien council would stop changing their ridiculous demands, Gary might have a chance to perfect his ability before they thrust him into a situation he may not be able to survive. But his survival isn’t the only thing in jeopardy.

The Adviera war may be imminent, but Gary's focus remains on completing his service quickly so he no longer has to make up excuses for his unexplainable disappearances with the aliens. But the more time he spends fulfilling the council’s absurd requests, the more trouble Gary lands in with his mom, and the more jealous his best friend becomes of his ability. Gary doesn’t realize it, but if he fails the Adviera, they won’t be the only ones who will suffer from the upcoming war—the fate of humanity could also be at risk.

First Page:
Gary ran his hand through his shaggy, brown hair and risked a glance back at the living room window. His mother’s gaze pierced him long enough to send a shudder rippling through his spine before she turned from the window and disappeared. She looks like an angry gargoyle.

His mom had scolded him countless times because he went looking for trouble. Gary, however, thought it was the opposite—trouble always found him. Although, exactly how he might step into some kind of mess while walking the dog, he had no clue.

He grabbed for his earbuds and shoved them into his ears. Bobbing his head to the thundering drums and crashing guitars, he stepped in synch with the music. Buster, his Golden Retriever, had other ideas and dragged Gary down the street as if on a mission. The dog stopped at a dimly lit street lamp near the end of the block, barked, and pulled hard on the leash. In an effort to hold him back, Gary grabbed Buster’s collar with his free hand.

Gary looked around the darkening street. Despite the parked cars, no one was outside. Following Buster’s gaze, he found the cause of the disturbance—white lights floating across the sky.

“It’s just a plane. Come on.” He tried to yank the dog back toward the house. Buster planted his butt on the ground and whined.

Hearing the soft whir of an engine, Gary tracked the lights drawing closer in the sky. They morphed into various shapes no longer looking like any plane he’d seen before, and the noise changed to a high pitched hum.
Posted by Jamie Krakover at 9:00 PM 14 comments: