When everyone has a brain-interfacing tracking chip, one glitch threatens the entire network. Kaya Weiss is that glitch.

Through thoughts and blinks, Kaya can access anyone or anything on the tracker network. But the authorities monitor everything—where Kaya goes, who she talks to, and what she searches. And without the ability to turn it off, Kaya and her family can’t observe a tech-free Shabbat. To fix the glitch, the authorities slice into her skull to reset her tracker, leaving Kaya to question more than the system’s invasion into her faith.

Evading the authorities requires some serious tech skills the rogue underground Ghosts can offer. But Kaya’s not sure she can trust them—even if their top tech wiz, Bailen, has interest in her running deeper than her bum tracker. Kaya must decide if gaining freedom is worth losing her tracker’s infinite knowledge—because to take down the tracker network, she must betray the only tech she’s ever known.

“Come on, Kaya. You know you want to.” The black box in Troy Ackerman’s hand flirted with me like a bad boy. Half thrill ride, half arrest warrant.

We were going to get caught. No question about it.

Masking your tracker signal got you a date with the authorities at best, and at worst… I didn’t want to think about it. I wasn’t lucky enough to stay out of trouble. I was never that lucky.

Troy held the radio wave generator between his thumb and index finger as if he were expecting me to take it at any moment. While his bulky torso was slightly intimidating, his height wasn’t.

The buzz from falling off the tracker grid—pure silence and vision devoid of popups and apps—wasn’t worth the risk of losing control, losing the connection and security of the network. If the authorities showed up, brain probing us to check for tracker glitches would be the least of our problems.

Troy waved the box in my face. “You sure? It’s such a rush!”

I shivered despite the bonfire blazing in front of us. “I’m good. I don’t need a record.”

“Wasn’t it just Yom Kippur or something? You should be good on the sin front for a while.” He thrust his hips toward the box and my best friend Lydia let out a quick giggle, batting her long lashes at him.

Ugh! Of all the boys why did she have to be into him? “You know that’s not how it works.”

That little box was trouble. Worse than Pandora’s. My muscles tensed at the thought of all the chaos about to be unleashed. At least if I refused to disrupt my tracker signal, I wouldn’t have to lie about breaking the law.

Read the rest of chapter 1 here 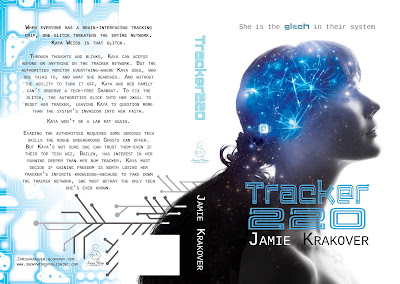 Buy TRACKER220 at these locations:
Main Street Books - if you buy from Main Street books I will sign your copy.
Barnes and Noble
Amazon
Kobo
Apple Books
Book Depository (free shipping worldwide)
IndieBound (find a local independent bookstore near you)
Preorder Campaign (This campaign is closed, stay tuned for more giveaway opportunities)
If you preorder TRACKER220 or request that your library carry it before October 20, 2020, you are eligible for some TRACKER220 Book Swag, including bookmarks, a signed bookplate and more. Fill out this form to receive your goodies!
Media Kit