Why I Fight For Women in STEM

This world has a problem. Well many in fact, but one of the ones I'm most equipped to deal with is the war against women in STEM. It's a fight I've been in my whole life but only recently really started finding my voice for. And when I see women in STEM facing adversity it really grinds my gears. I've been there. It's a horrible place to be. It makes you want to quit. It's really REALLY hard to find your voice and the best way to speak up. To even know it's okay to say something without fear of repercussion.

And I have to say an interesting thing happened when I started speaking up. Rather than people telling me to shut up as I suspected might happen, people started thanking me. Thanking me for saying something and for saying it eloquently. And the weirdest part of all, they told me to keep speaking up. So I have.

And when I woke up this morning to a tweet from one of the seniors on the robotics team I mentor, I couldn't stay silent.
She tweeted this article: https://www.nytimes.com/…/silicon-valley-men-backlash-gende…
with the caption "Welp wish me luck"

It pains me that young women excited about engineering not only have to see this stuff, but also STILL have to think about how to handle situations like this before they even enter college, let alone the workplace. And it's horrible that women today still have to deal with this kind of Bullshit.Yep I said BULLSHIT. Because that's exactly what it is.

This young lady is one of the brightest programmers I have ever met, and programming was not even on her radar until she joined the robotics team 3 years ago. She is almost completely self taught and has come so far. Now she is looking at it as a major and a career. To see this excitement from a confident young woman waiver in the slightest bit breaks my heart.

THIS is why I mentor. This is why I wont be silent. And this is why I keep fighting. Because people STILL don't realize the opposition women in STEM face. It shouldn't be like this. And I fight so that one day it won't be. In the meantime, I'm glad I have other strong women I can band together with, and I'm glad I can inspire the next generation of strong women in STEM. If you have the opportunity to inspire young women in STEM, support them and fight for them. Help them find a voice where they don't have one.

This is why I fight for women in STEM, not just because I am one, but for the future. We need women in STEM. We need diverse voices. It's how we will ultimately learn, grow, and be more innovative as a society. Every person has a unique background. Embrace those differences around you and rise to the top as a group. One persons differences does not prevent you from reaching your goals.

I repeat: ONE PERSON'S DIFFERENCES DOES NOT PREVENT YOU FROM REACHING YOUR GOALS.

Work together and achieve those goals together.

And if you're a women in STEM feeling lost, without a voice, or at their wits end, know that I'm here for you. Know that's I've been there. And know that we can fight it and make it better. In the meantime, let's talk about it, let's support each other, and let's win this fight.
Posted by Jamie Krakover at 10:23 AM 2 comments:

Email ThisBlogThis!Share to TwitterShare to FacebookShare to Pinterest
Labels: STEM, women in STEM

Hey everyone... I know it's been a hot minute since I've last blogged. Sorry about that. The end of 2015 and all of 2016 was quite the busy year. Lots of life changes and family happenings. And in addition to all of that, I've been hard at work planning a regional conference for the Society of Women Engineers (SWE) which is in 3 days! EEK!

And oddly enough my awesome news has something to do with SWE. I love happy coincidences!

My sci fi short story Arch Nemesis about a girl trying to thwart her arch nemesis who has a secret lab underneath the St. Louis Arch is going to be PUBLISHED! My story will be included with a whole bunch of awesome other stories in an anthology titled BRAVE NEW GIRLS: Stories of Girls who Science and Scheme which features young women with a knack for STEM (Science Technology Engineering and Math)--Girls who engineer, tinker, hack, and more, using their smarts to save the day. It’s got space operas, sci-fi mysteries, steampunk, cyberpunk, all kinds of punk!

Proceeds from the anthology will go towards to the Society of Women Engineers scholarship fund! See I told you it had something to do with SWE.

I'm so excited to be part of something that will give back to an organization that has helped me so much in my engineering career.


I know I can't believe all this awesome all at once.


I've got the cover reveal for BRAVE NEW GIRLS right here on my blog!


So check out the amazing cover to BRAVE NEW GIRLS: Stories of Girls who Science and Scheme. 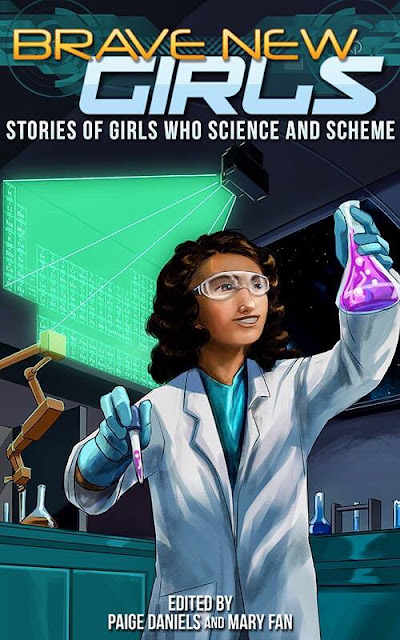 Isn't that an amazing cover?


Check out the awesome lineup for the anthology!

The 17th Quadrennial Intergalactic Neo-Cultural Expo and Science Fair by Jeanne Kramer-Smyth
The Adventure of the Brass Lamp by Margaret Curelas
Arch Nemesis by Jamie Krakover
The Babysitting Job: A Robot Repair Girl Adventure by Josh Pritchett
The Case of the Missing Sherlock by Mary Fan
Chasing the Copper Dragon by Karissa Laurel
Circus in the Sky by Lisa Toohey
Dangerous Territory by Holly Schofield
The Experimental Bug – First Test by Jelani-Akin Parham
Hack by Evangeline Jennings
In a Whole New Light by Michelle Leonard
The Last Android by Paige Daniels
Let Androids Eat Cake by Meg Merriet
The Maker’s Handbook by George Ebey
The Non-Existence of Gravity by Steph Bennion
Nova by Stephen Landry
Our Very Respected and Always Benevolent Leader by Kay Dominguez
Scilla’s Monster by Elisha Betts
Skyris by A.A. Jankiewicz
Sweet Emotion by Bryna Butler
The Swiss Cheese Model by Eric Bakutis
The Verne Shot by Brandon Draga

ADD IT ON GOODREADS: https://www.goodreads.com/book/show/34197584-brave-new-girls?ac=1&from_search=true

Brave New Girls: Stories of Girls Who Science and Scheme is the second volume of the Brave New Girls anthology series. The first, Brave New Girls: Tales of Girls and Gadgets was released in June 2015 and has so far raised thousands of dollars for the Society of Women Engineers Scholarship fund. Find it on Amazon.


Be sure to pick up your copy in August 2017! It's going to be an incredible anthology!
Posted by Jamie Krakover at 6:30 AM 8 comments: